Tune in to see Maurice Enright, founder of Sera Husky & Animal Rescue talk about re-homing and the needs of older animals.

Before and after photos:   we found Abbey in Tralee with severe sarcoptic mange, a skin disease caused by parasitic mites and occasionally communicable to humans.  It is characterized by severe itching, hair loss, and the formation of scabs and lesions.  This painful condition can be prevented by regular grooming, brushing and baths. 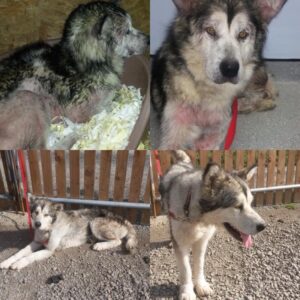